The code used for design and construction purposes for a pressure piping system is the ASME B31 Pressure Piping Code. ASME B31 Pressure Piping code includes piping systems that have operating pressures ranging from vacuum to high pressure. ASME B31 Code is not a book that provides detailed information on a job. However, the ASME B31 code only provides guidance on the minimum requirements for pipe installation according to its designation.

The ASME B31 Code consists of a number of “sections” that are independent and are also published separately. However, all of them remain under the auspices and direction of the ASME Committee B31 Code for Pressure Piping. It is the duty and responsibility of the project owner or “owner” to decide which Code section to use on their project. However, there are several things that must be considered in determining which code section to use, namely:

ASME B31.4 Pipeline Transportation System for Liquid Hydrocarbons and other Liquids

Pipeline as per ASME B31.4 are found in pipeline systems that deliver fluids which are generally in liquid form from a factory to a terminal, as well as within the terminal itself. This Code covers requirements for the design, materials, construction, assembly, inspection and testing of pipelines that transport liquids such as crude oil, condensate, natural gas liquids, liquefied petroleum gas, carbon dioxide, liquid alcohol, liquid anhydrous ammonia, and liquid petroleum products. others which are transported from production facilities (places), tanks, processing places, stations / terminals (sea transportation, rail, trucks) and other places of receipt and delivery. This piping consists of pipes, bends, connections, gaskets, valves, support devices, fittings, and other piping parts.

This Code also prescribes requirements for the design, materials, construction, assembly, inspection, testing, operation, and maintenance of piping transporting aqueous slurries of nonhazardous materials such as coal, mineral ores, concentrates, and other solid materials, between a slurry processing plant or terminal and a receiving plant or terminal. 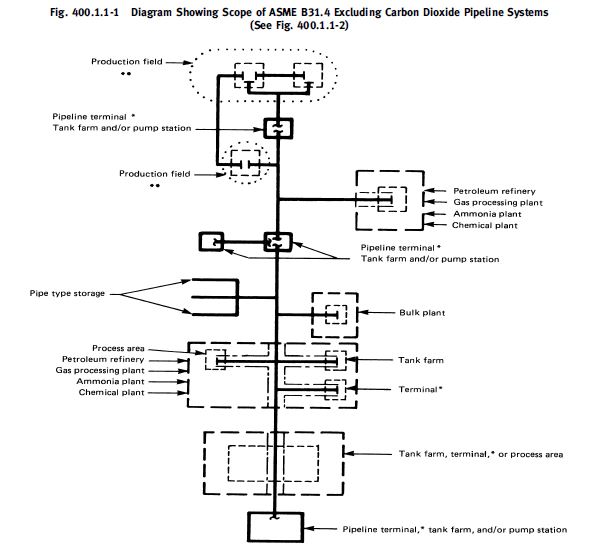 Limitation. ASME B31.4 does not apply to:

2. Pressure vessels, heat exchangers, pumps, meters, and other such equipment, including internal piping and connections for piping except as limited by Paragraph 423.2.4 (b) of ASME B31.4

5. Petroleum refinery, natural gasoline, gas processing, ammonia, and bulk plant piping, except as covered within the scope of the code

7. The design and fabrication of proprietary items of equipment, apparatus, or instruments, except as limited by this code

If you want to design pipes for fluid transportation with a design temperature above 120 ° C (for example, produced fluid from oil well with a temperature of 130 ° C to a gathering station), then you can use ASME B31.3 instead of ASME B31.4. It is important that we need to involve the Process Engineer and / or Subsurface Engineer when designing production facilities in the oil and gas industry.

If you want to design pipes for liquid ammonia transportation with a design temperature of -33 ° C from the ammonia plant to the jetty or to another plant (eg Ammonium Nitrate plant near the ammonia plant) then you can choose ASME B31.3 instead of ASME B31.4 . This is where we need to involve the Process Engineer and understand the Process and Flow Diagram properly so that we avoid mistakes.

disclaimer: Please always refer to the new and latest ASME B31.3 edition for your work.