what is a platform?

The oil and gas contained in the bowels of the earth turned out to be not only below the land but also below the seabed. To take it, of course, we need an equipment (structure) supporting with advanced technology that can survive the fierce sea waves.

Offshore platforms are structures or buildings built offshore to support the exploration or exploitation of oil and gas. Usually, offshore platforms have a drilling rig that functions to analyze the geological properties of the reservoir and to make holes that allow the extraction of petroleum reserves or natural gas from the reservoir.

Most of the platforms are located offshore from the continental shelf. With technological advances and rising prices of crude oil, drilling and production in deeper waters have become more feasible and economical. A platform may have about thirty drill bits. Directional drilling allows drill wells to be accessed at two different depths and also in a remote position and spreads to a radius of 5 miles (8 kilometers) from the platform. Distant underwater wells can also be connected to platforms with pipelines. Underwater systems (subsea system) can consist of one or several wells connected to the manifold (center of the connecting piping channel) for further distribution to the processing center.

Oil and gas exploration work, almost certainly will cost a lot, high technology, and also related to various interests. In short, mining work is a mega project, in terms of investment and the physical form of the structure handled.

The need for large costs and high technology will be increasingly felt when it comes to offshore locations; either in deep water or even in very deep waters (ultra-deepwater). This is due to greater levels of difficulty, risk, and uncertainty when compared to work on land in general.

The construction of an offshore platform system includes the process of fabrication, transportation, and installation process or installation of platform structures in its operations in the middle of the ocean.

The platform is built on a jacket leg or concrete, or both, embedded directly into the sea floor, supports the upper deck (deck/topside) with space for drilling rigs, production facilities, and workers’ dwellings. The platform, based on its rigidity, is designed for very long time use (up to 50 years). Different types of structures are used, steel legs, concrete caisson, steel and even floating concrete. The vertical jacket leg is composed of tubular steel and is usually nailed by the earth to the seabed. Fixed an economically feasible platform for installation in water depths to around 1,700 feet (520 m). 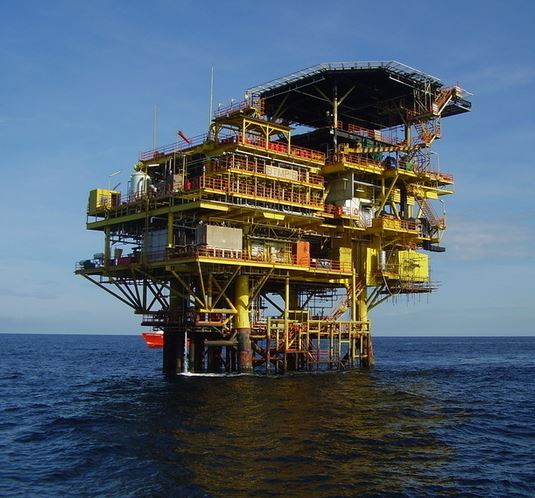 The platform consists of a slim flexible tower and a pile foundation that supports conventional decks for drilling and production operations. Compliant towers are designed to maintain significant deflection and lateral loads and are usually used in water depths ranging from 1,200 to 3,000 feet (370-910 m). 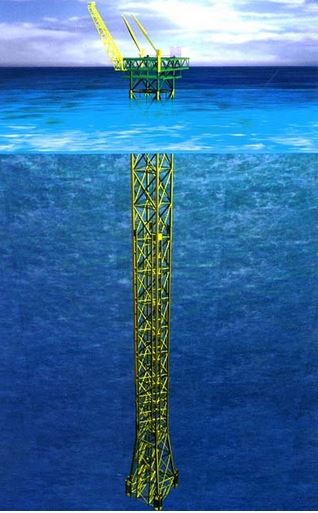 This platform has a floating hull (column and pontoon) which is enough to make a structure to float (like a ship), but also heavy enough to keep the structure upright and stable. Semi-submersible platforms can be moved from one place to another, can be raised or lowered by changing the amount of water in the floating tank. This platform is generally tethered with a combination of chain rope, polyester wire or rope, or both, during drilling or production operations, or both, although it can be maintained by using a dynamic positioning system. Semi-submersible can be used in water depths from 200 to 10,000 feet (60 to 3,000 m). 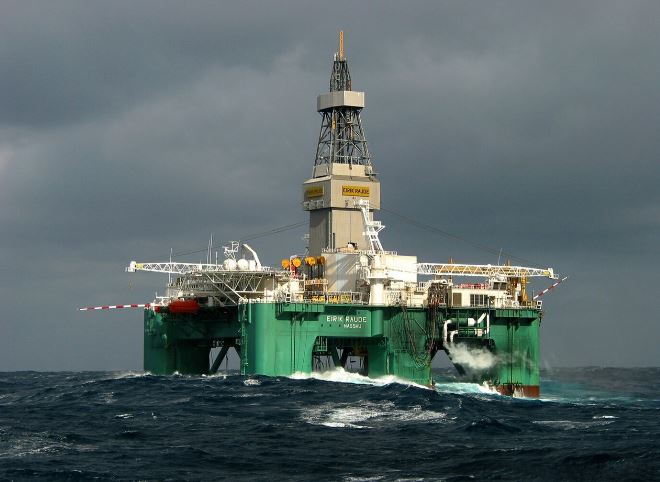 Jack-up Drilling Units that can move (or commonly called jack-ups), as the name implies, are rigs that can be jacked up over the sea using legs that can be lowered, such as jacks. This platform is usually used in water depths of up to 400 feet (120 m), although some designs can be used at depths of 550 ft (170 m). This platform is designed to move from one place to another and then plugs itself by deploying feet to the bottom of the sea using a gearbox on each foot. 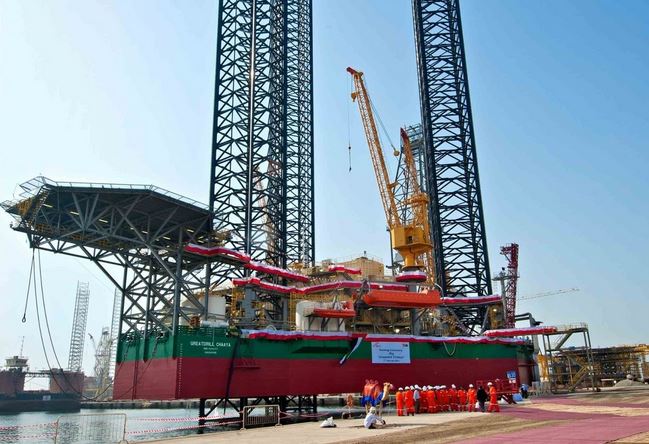 The drillship is a maritime vessel that has been equipped with drilling equipment. This platform is most often used for exploration of new oil drilling or gas wells in deep water, but can also be used for scientific drilling. The initial version was built on a modified tanker hull, but the design in accordance with its purpose has been used today. Most Drillship is equipped with a dynamic positioning system to maintain the position above the drilled well. Drillship can drill in water depths up to 12,000 ft (3,700 m). 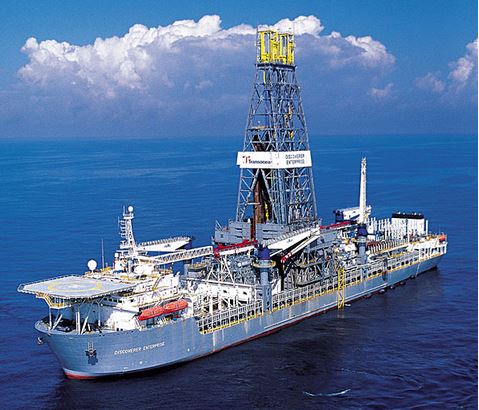 FPSO (floating production, storage, and offloading system) consists of large monohull structures, generally (but not always) in the form of ships, equipped with oil and gas processing facilities. This platform is tethered to the location for a long time and does not actually drill oil or gas. Some variants of this application, called FSO (floating storage offloading) or FSU (floating storage units), are used exclusively for storage purposes, and have very little process equipment. 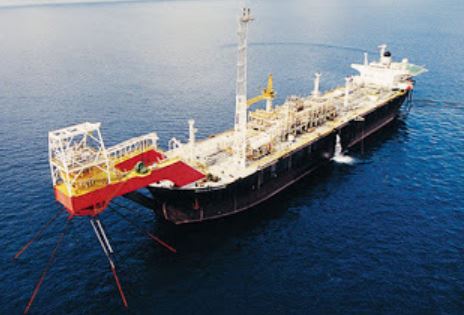 TLP is a floating platform that is tethered to the sea floor to eliminate the most vertical movements in the structure. TLP is used in water depths up to about 6,000 feet (2,000 m). “Conventional” TLP is a 4-column design that looks similar to semisubmersible. 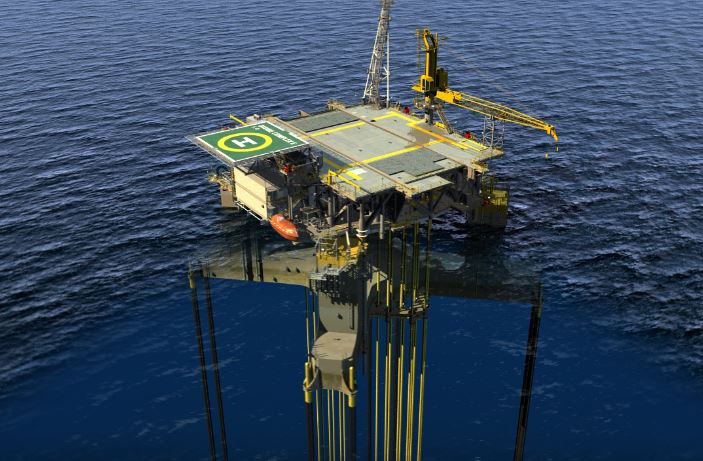 A GBS can be made of steel or concrete and is usually embedded directly into the seabed. Steel GBS is widely used when there is an unavailability or limitation of crane barges to install fixed platform platforms. Steel GBS usually does not provide hydrocarbon storage capabilities. GBS steel is installed by pulling it from the fabrication field, either with wet towing or dry towing, and self-installation with ballasting controlled from the compartment with seawater. For GBS positions during installation, GBS can be connected to one of the transportation barges or other barges (provided that it is large enough to support GBS) using a “jack strand”. Jacks will be released in stages while GBS adjusts ballasting to ensure that GBS does not move too much from the target location. 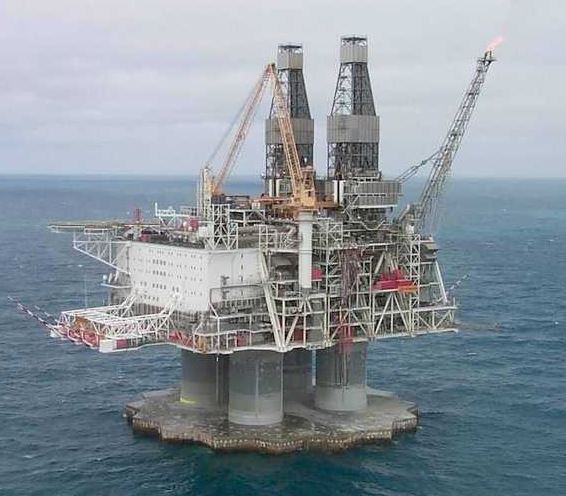 Spar is tethered to the seabed like TLP, but TLP has vertically tensed tether, whereas spars have a more conventional mooring line. The Spar has been designed in three configurations: a conventional single cylindrical hull, a “spar truss” where the center consists of a truss element connecting the upper buoyant hull (called a hard tank) with a soft bottom tank containing a permanent ballast, and a “spar cell” built from a cylinder double vertical. Spar has a higher stability than TLP because it has a large counterweight at the bottom and does not depend on the mooring to hold the upright. Spar also has the ability, by adjusting the tension of the mooring line (using a chain-jack attached to the mooring rope), moving horizontally and positioning itself above the well a bit away from the main platform location. 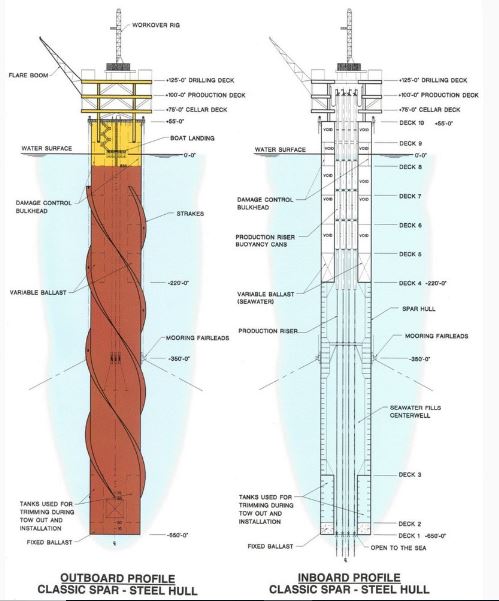