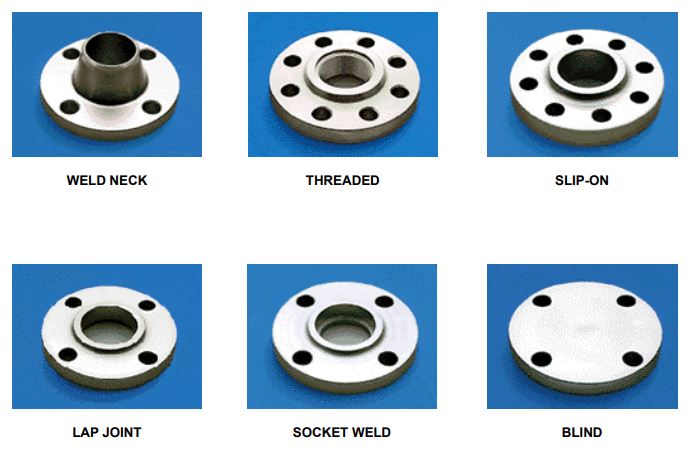 Flange is a component that is used to combine two pipe elements with a valve or pipe with other equipment into one complete unit using bolts. So two separate objects can become one part for a specific purpose. Usually this flange is used to join and become one rigid connection. So with this  flange, the effort to connect 2 parts into one will be easier. Especially for high pressure gas pipes or for water distribution systems, it requires a long pipe. Then this tool has the responsibility of putting piping parts together.

Flange type based on ANSI / ASME B16.5 Class

Type of flange based on size (NPS)

The pipe flange can also be divided according to the size of the pipe. So between one pipe and another pipe of different sizes, the type of flange is also different. The size of the pipe is known as NPS. NPS is short for nominal pipe size, which is a nominal size used to differentiate pipes.

Back regarding the flange, the distribution of flange types based on NPS we will recognize the sizes ½ “, ¾”, 1 “, 2” … 10 “, 12″ to 24” and so on, following the size of the pipe to be installed the flange. The division of this type of flange is actually quite easy to understand.

A discussion of what types of flange are based on ANSI / ASME B16.5

The discussion with a focus on what is a pipe flange will be expanded by discussing several types or types of the flange itself. The first flange has the name weld neck type flange so named because the shape of this flange is like having a tapered neck and tapers at the end. The flange used butt weld to be connected to pipeline. Usually we use Radiography testing to make sure the welding is good.

With the aim of the small end it can accommodate smaller pipes or hoses so that it can be used to make things easier later. Most of the flanges of this type are used for high pressure gas pipes.

The advantages of weld neck flange:

This type of flange is suitable for high pressure, extreme temperature, shear impact and high vibration. Furthermore, the configuration does not cause interference with flow.

The discussion of the next type of flange is the Threaded type flange, at first glance this one object is more similar to a gasket. However, this type is actually a threaded flange that is used to join several parts together. In general, it can be said that this tool is a pipe connector.

Most of the types connected to this one tool are high pressure gas pipes. Of course, this type of pipe is made of a material with a high thickness so this tool is very useful for combining several parts of the pipe later.

The next discussion is the type of flange slip-on and lap joint types. In this type, between slip-on and lap joint, at first glance, they both have similarities and the functions of these two types are the same. Namely joining the main pipe so that it is resistant and does not cause gaps between the pipe joints with each other.

the disadvantages of slip-on flange :

This type of flange has low shock and vibration resistance. This type of flange is ideal only for low pressure applications because of its strength at an internal pressure of about one third of that of a weld neck flange. The slip0on flange configuration causes flow disruption in the pipe. Inner welds tend to corrode more easily than flange type neck welds.

Given that if there is a gap or leak, it will be very detrimental to both the impact on nature and the workers who repair this pipe later.

The socket flange, this type of pipe flange is similar to a slip-on, it’s just that on the outer side of the flange there is resistance which causes the pipe to be inserted into it not penetrated.

Reducing flange, this type of flange has a function to join pipes of different diameters.

For the blind flange, this is the final part of the connection type on the pipe. It is called a blind flange because the position of this one flange is the last barrier of the pipe. So this section is used for blocking fluid flow, it can be said that the last channel in this section is a part that is quite vulnerable.

Because this section will receive a high enough pressure from the initial position of the pipe originating or can be said to be the last barrier.

Orifice Flange is widely used in conjunction with orifice meters to measure the flow rates of liquids and gases. They are basically the same as standard weld neck, slip-on and screwed flanges, only the difference here is that there is a hole in the flange plate which is later useful as a measure of fluid flow rate.

The discussion of what is a pipe flange based on Class, NPS and ANSI of the flange has also explained the functions of each of the pipe system components. Of course, each of the flanges mentioned above has its own strength and function.

Given that each flange will fill or occupy how many parts have different risks from the others. So don’t be surprised when you find several types of flanges made from different material compositions.

There are 3 types of face type flange, namely:

Flat face, as the name suggests is flat or plain, it means there is no texture whatsoever, this flange has a flat touch surface. An example of this flange is as shown in the picture:

This type of face flange is generally used for cast iron and galvanized types. Also used for low pressure. While the type of gasket used is usually a flat sheet or full face.

This type of flange has a touch surface that is higher or raised (raised), with a texture with small, circular lines. If you look from the side, you will see a slightly protruding shape in the middle. An example of this flange is as shown in the picture:

This type of flange is generally used for medium class, size for fluid C150 ~ CL900. For the gasket itself, use a spiral wood gasket.

This RTJ flange has a shape that is almost the same as the Raised Face type, there is a difference that lies in the basin on the flange surface used to place the gasket ring and a touch surface that is larger than the raised face type. An example of this flange is as shown in the picture:

This type of flange is used for high classes, namely class 900 # and above, and is also used for fluids that have a flow value of CL900 and above.

How to Read Flange Specifications

That’s a simple explanation of the flange type based on the face and how to read the correct flange specifications.