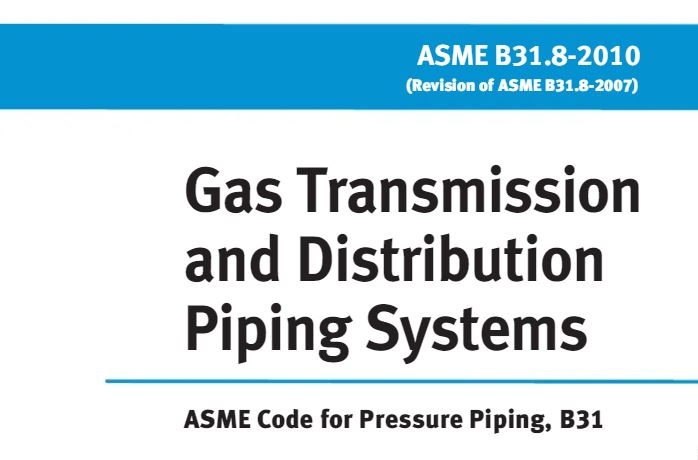 Minimum wall thickness of pipe should be calculated by considering all the combination stresses which may lead buckling and collapse not only in construction phase but also the pipeline location. In ASME B31.8, the wall thickness is calculated based on traditional Allowable Stress Design, in which design stresses are compared to a factorized yielding stress level and consider some factors like location class, design temperature and joint factor. Wall thickness calculation in ASME B31.8 is relatively easy to use compare to DNV-OS-F101. ASME B31.8 standard is not as strict as ASME B31.3 standard, but it is more stringent than ASME B31.4 standard.

ASME B31.8 is often used as the design standard for natural gas piping systems in several facilities, such as compressor stations, gas processing facilities, metering stations, storage tanks and gas transporting pipeline. The design pressure for steel gas piping systems or the nominal wall thickness for a given design pressure shall be determined by the following formula:

By using simple mathematical logic, the formula for calculating pipe thickness according to ASME B31.8 which refers to the internal pressure load is as follows:

The design factor used in ASME B31.8 related to pipe location and the facility type. This is similar with design safety factor. The maximum value is 0.8 ( not 1.0 ) and the lowest value is 0.4. For location class 4, the design factor is 0.4 for all facility.

A Class 1 location is any 1-mile section of pipeline that has 10 or fewer buildings intended for human occupancy. This includes areas such as:

This is a Class 1 location where the design factor, F, of the pipe is greater than 0.72 but equal to or less than 0.80 and which has been hydrostatically tested to 1.25 times the maximum operating pressure. (See Table 9.13 for exceptions to design factor.)

This is a Class 1 location where the design factor, F, of the pipe is equal to or less than 0.72, and which has been tested to 1.1 times the maximum operating pressure.

This is any 1-mile section of pipeline that has more than 10 but fewer than 46 buildings intended for human occupancy. This includes fringe areas around cities and towns, industrial areas, and ranch or country estates.

This is any 1-mile section of pipeline that has 46 or more buildings intended for human occupancy except when a Class 4 Location prevails. This includes: • Suburban housing developments • Shopping centers • Residential areas • Industrial areas • Other populated areas not meeting Class 4 Location requirements

This is any 1-mile section of pipeline where multistory buildings are prevalent, traffic is heavy or dense, and where there may be numerous other utilities underground. Multistory means four or more floors above ground including the first, or ground, floor. The depth of basements or number of basement floors is immaterial.

SMYS stipulated in the specifications under which the pipe was purchased from the manufacturer or determined in accordance with paras. 817.1.3(h) and 841.1.4. The commonly used pipe in onshore facility is API 5L gr B, ASTM A 53 gr B and ASTM A 106 gr B. Below are the SMYS Values:

you can download excel sheet to be used as pipe wall thickness calculation according to ASME B31.8 ( example ) in this link:

disclaimer: Please always refer to the new and latest ASME B31.8 edition for your work.