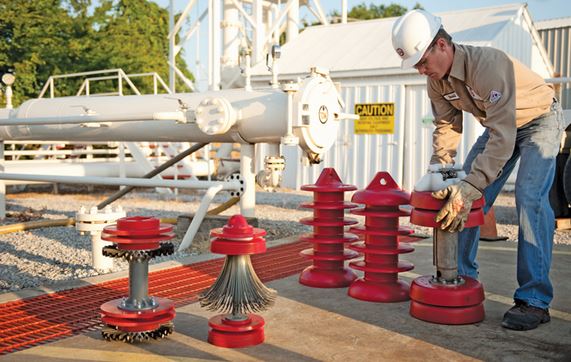 what is pig cleaning system?

each oil and gas company is required to carry out pipeline inspection activities. Inspection methods that are often used vary according to company requirements. starting from UT conventional, LRUT, MTM, visual inspection to the most sophisticated method, namely ILI or often called pigging. based on my 15 years of experience in the inspection field, this pigging method is the most perfect inspection method with a relatively cheap price compared to the LRUT method. This pigging inspection process is carried out by inserting pig in the pipe without interrupting the pipe operation or stopping the flow in the pipe.

Pigging operations include, but are not limited to, pipe cleaning and inspection. Cleaning pigging is used to clean the dirt in the pipe. impurities referred to include materials from the fluid itself or used material during pipe construction, namely sand, wax, scale, welding rod, gloves, etc. Smart pigging or ILI is used to determine the condition of pipe integrity, namely the thickness of the pipe, the sleeve attached to the pipe, the corrosion that occurs in the pipe and the features along the pipe. the data obtained is very detailed. we can find out the size of corrosion in mm, even the location of the weld joints between pipes. length of corrosion data and the form of corrosion that occurs in the pipe is used by an engineer to calculate the operating strength of the pipe.

pig cleaning system consists of several parts, namely pig launcher, pig tracking, and pig receiver. Pig launcher is placed in the upstream section of the pipe. Initially, the pig is inserted into the pig launcher, then the pig is kicked by the kicker line so that the pig enters the main pipe in the direction of the flow. when the pig is running in the pipe, there is a pig tracking mechanism for monitoring the location of the pig. in the downstream, the pig will pass through a pressure vessel commonly referred to as a pig receiver. impurities in the pipe will be pushed by the pig into the pig receiver. when doing pipe cleaning or sometimes we call it progressive cleaning, there are several types of a pig that are used, namely:
1. low-density foam pig
2. medium-density foam pig
3. high-density foam pig
4. cup pig
5. BI-DI pig

why do we need all kinds of pigs? The main target of pig cleaning is the highest level of cleanliness of the pipes so that the criteria are determined by pipeline pigging companies but we must also avoid the occurrence of a pig stuck. Foam pig is useful to ensure that there are no obstacles/restriction in the pipe. if there is a restriction, the foam pig will be damaged. then the inspector and the operator will look for the cause and location of the restriction. This foam pig is a tool to confirm that the cup pig and BI-DI pig can enter the pipe safely without being stuck. Cup pig is used to clean the dirt in the pipe. however, the pig cup is designed to clean only a part of the dirt. heavier impurities, will be cleaned by BI-DI pig. In Cup Pig, we add a Gauging plate 75% and Gauging Plate 95% of pipe inside diameter. This gauging plate is used to measure the minimum actual pipe inside diameter. At the end of cleaning pig, the pipeline pigging companies will run a Smart pig or sometime called as CDT+EGT or MFL.

sometime we faced conditions that are not ideal so that the transmitter and pig can not be tracked its position. Pipeline pigging companies call this condition un-track pig. to anticipate this condition, the inspector uses an additional tool, the geophone. This geophone serves to increase the sound inside the pipe so that it can be heard clearly by the ear. When the pig passes, the sound of the pig will be detected by the ear. Here are some conditions that often cause un-track pig and the inspectors are forced to do pig hunting:
1. transmitter signal is weak
2. “noise” occurs along the pipe line. noise can be caused by vehicles crossing the pipeline causing fake signals to be caught by the EPD.
3. error setting in the EPD tool
4. transmitter apart from medium-density foam pig and high-density foam pig
5. Low density foam pig cannot be fitted with a transmitter. so the inspector only uses geophones.
6. the temperature of the fluid is so high that the transmitter does not function to emit a signal.